It’s never a dull moment in my workshop-hamshack. Before dying in 1399, Poland’s Queen Jadwiga traded her jeweled crown for one of wood so that her riches could be used to renovate the university in Krakow.  Queen Jadwiga was beatified in 1986 and gained sainthood when Pope John Paul II canonized her in 1997. The Queen’s body has been exhumed at least three times. A local church group obtained relics (a chip of bone!) of the saint to display in their perpetual adoration chapel. I was asked to make a home for the Queen. I bricklayed and turned mahogony in the lathe to make the wooden crown that will house the relics. Neodynium magnets allow the fleur de lis that will hold the golden locket with the relics to break away so that the bishop will be able to wave it around during the consecration ceremony. I made a bracketed shelf with a rounded front for the crown to sit on.

Oddly this isn’t the first time I’ve had a saint’s relics in my shack. A couple years ago I made another relicquary, a walnut case with a glass door for St. Teresa’s relics ( looked like a piece of bone marrow).  Kinda creepy, but kinda cool.

My brother John displaying  an homemade electric motor and a hit and miss engine that he made from an antique air compressor at last night’s meeting of the Nothwest Model Engineers.

What better way to instill the precepts of woodcraft, hardiness and self-reliance than to take the kids backpacking in America’s biggest national park? Alaska’s Wrangell St. Elias National Park and Preserve covers an area of  20,587 square miles.

From Chicago we flew to Anchorage, rented a car, and headed north a few hundred miles. Thirty miles of the gravel Nabesna Road brought us to Lost Creek which we followed high into sheep country.

The Park Service was doing some work near the road with this cool tracked vehicle.

It’s always good to have a rifle in bear country. 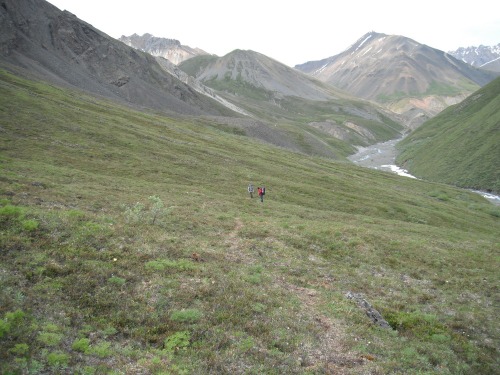 The scale of this country is immense. 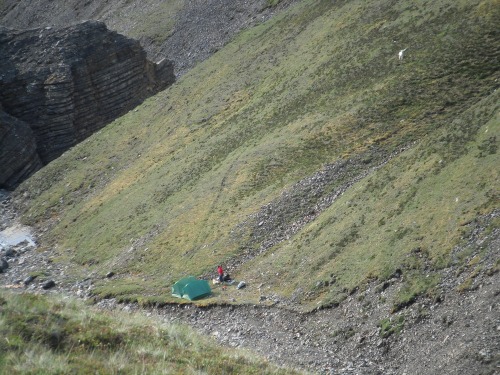 Tommy glassing the slopes for game. 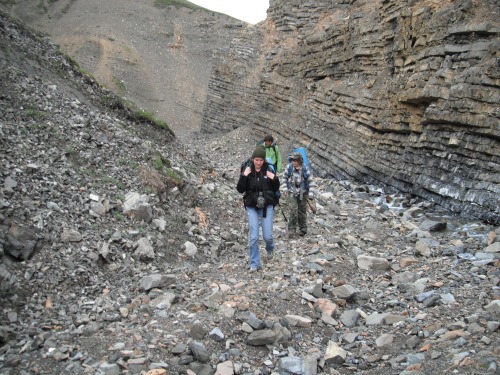 I can’t tell you how proud I am of my guys. Dorothy, Fawn, and Tommy were real troopers hiking more than 25 miles, building and striking camps, and climbing thousands of feet in rugged country and foul weather with heavy packs without complaint. A great time was had by all. 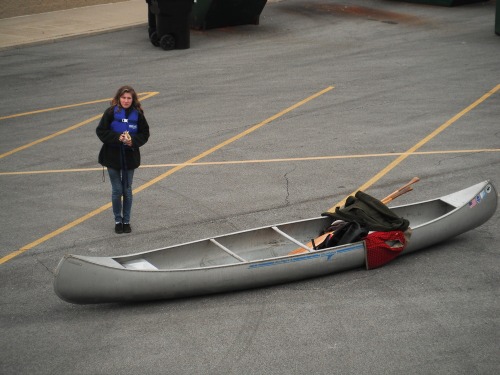 Something you may not know about The Radiotelegrapher is that I can account for a couple of thousand miles traveled in my Grumman canoe. Today to celebrate my birthday (51!), my little girl Fawn and I took a  trip up and down the Chicago river. We paddled from the northside down into The Chicago loop. Passing through a canyon of skyscrapers I was pleasantly surprised to learn that Fawn is a courier de bois in her own right and that she also pulls like an outboard motor. Highlights of the trip included a stop at Navy Pier and a downpour.

The Day The Music Died

Time sure flies. We are fast approaching the fifth anniversary of the end of Morse code testing for  U.S. amateur radio licensing. Prior to February 23rd 2007, an applicant to the amateur radio service that was interested in world wide communication needed not just exhibit a smattering of radio theory, but was also required to demonstrate a deftness in the manly art of telegraphy.  A lot of predictions were made, from the death spiral of ham radio into the swirling cesspool of citizens band, to an actual heaven on earth brought about by a genius class, who, once freed from the shackles of a five word per minute test, would be able to deliver ham radio to the promised land. So how did it wash out? It turns out everyone was a little bit right.

A lot of new blood was brought into the hobby, in fact the number of U.S. licensees recently broke the 700,000 mark. Among our new brothers (and sisters!) are some really sharp children of the computer age. I’m of the era when the internet was just a clever system of pneumatic tubes, so I look forward to picking the brains of these nerds. More operators also bring different points of view that make for interesting QSO’s. I’d even call some ex CB’ers true radio men.

The floodgates also let in a few mopes. Five years later many are still on their HT talking about getting on the HF bands. Most of those that made it really aren’t much of a threat to the airwaves though, feeding their signal into a slinky just isn’t likely to cause an international incident. We shouldn’t throw the babies out with the bath water though. Microphone shyness, or other commitments shouldn’t be construed as a lack of dedication to the radio art. My own on air blunders have been met only with kindness. A warm hand on the shoulder can lead these guys down the right path. Ah the true path.

So what about CW? Alive and kicking! To the uninformed Morse’s code probably seems rearward looking, like a trip to the renaissance fair, or perhaps a route 66 tinplate sign hanging in the garage. Of course CW has a heritage and it’s traditions, but it’s beauty isn’t trapped in history. Just because 32,000 years ago one of our forebears recorded the glories of a hunt on the walls of a cave, it certainly doesn’t make capturing a likeness with pencil and paper any less lovely. CW gives the operator not just the chance to buy something, but the chance to be something. CW is the mode of craftsmanship. When Tut’s tomb was prized open, the world wasn’t admiring the desicated bones or the incestuous bloodlines of the boyhood king. It was (and still is ) in awe of the craftsmanship of the workmen that filled that time capsule. I don’t expect Morse telegraphy, or even ham radio, to stoke the furnace in everybody’s loins, but Marconi’s gift gives every ham the chance to craft signals that will still be coursing through the aether long after the four winds have reduced the pyramids to the finest powder. To me that’s pretty darned cool.

Today in an Oplatek (sharing of the wafer) church pageant, my boy Tommy acted the part of Father Kolbe.

My little girl Fawn artfully played the part of another brave Polish martyr,  Karolina Kozka. After the show we all enjoyed the aptly named “Feast of the Kings”.

Bored with his video games, Tommy decided we should do a project out in the shop. Here Tommy is bending some 3/8″ round stock that was donated by Phil, K9FH ….

on our compact bender.

Now Tommy is heating the steel to bend over some legs.

A handle inert gas welded to the “U”… 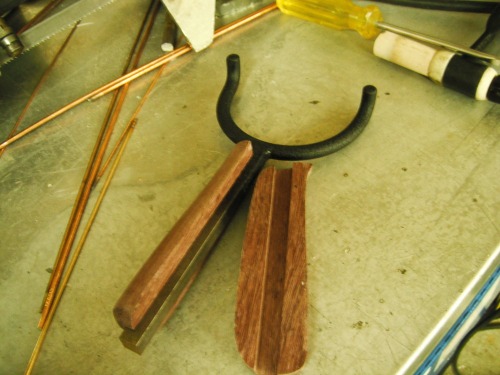 is housed in grips milled from some fancy purpleheart wood, courtesy of, Grant, KC9SJQ. 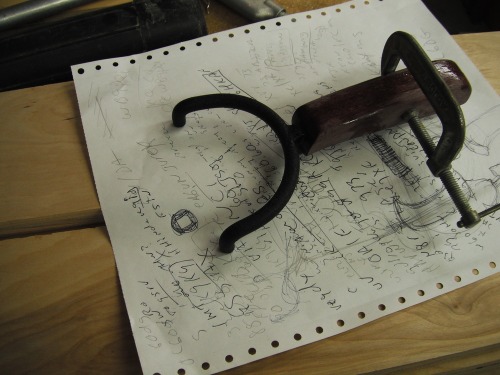 The frame was bedded to the grip panels in epoxy. Before I could snap another shot, some sanding, installation of surgical tubing rubber bands, and a leather pouch were added . Tommy slipped into the forest with his new slingshot.
Posted in Uncategorized | 5 Comments

Lately I’ve noticed a trend toward blogs that have opportunities to purchase a paid subscription, or donate via pay-pal, cash, cheque, or carrier pigeon. Here at The Radiotelegrapher the office and field staff will continue to work in poverty. Of course manufacturers of high end ham radio gear should always feel free to send samples of their product for fair and balanced review in our labs. Regretfully, said gear cannot be returned. Happy holidays folks!

Local ham KC9RP, Hap Holly, produces the RAIN Report (Radio Amateur Information Network) it is a wonderful weekly podcast of very high quality that is well worth checking out. At the link you’ll also find archives of the program.

At the Internet Archive 511 issues of Wayne Green’s “73 Amateur Radio Today” are available for online viewing and download. I’m in magazine heaven!